There is a thing going on in the United States right now (since 2006) called the National Popular Vote Interstate Compact. It is an agreement among several U.S. states (currently MD, NJ, IL, HI, WA, MA, DC, VT, CA, RI, NY) that currently has no effect, but which specifies that once the Compact has been ratified by enough states that their combined voting power exceeds 50% of the Electoral College, the group as a whole will throw all of their Electoral College votes directly to the winner of the national popular vote in every Presidential election. 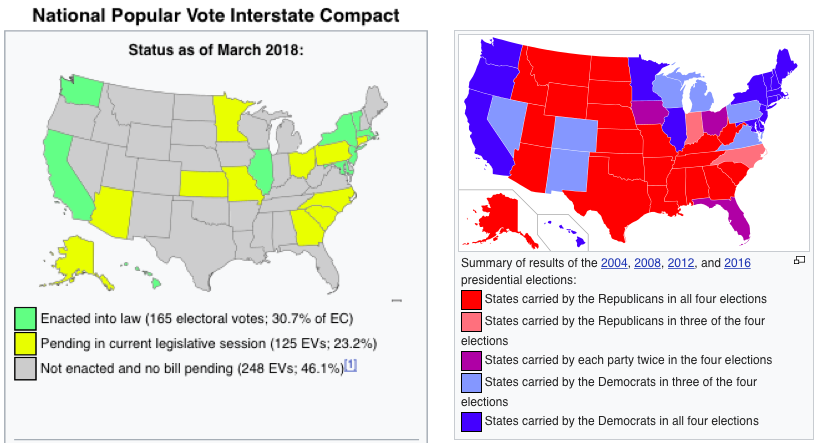 This is a neat way of dealing with a thorny problem: how to efficiently and effectively deal with a rules change that might be popular, but would be very hard to make via traditional channels.

Also consider the paradox of the economists and the $20 bill on the sidewalk:

The young economist looks down and sees a $20 bill on the street and says, “Hey, look! A twenty-dollar bill!” Without even looking, his older and wiser colleague replies, “Nonsense. If there had really been a twenty-dollar bill lying in the street, somebody would have picked it up by now.”

Now for the WG21-geek part

Some number of vocal and knowledgeable people all say that

The paradoxical result is that everyone altruistically agrees to continue with the status quo, even though the participants in the discussion all believe that the status quo is worse than the alternative.

Recently, this pattern came up in a discussion of how:

And I feel like it’s come up fairly often in the past, although I’m blanking on any other examples. I’ll add them here as I think of them, if I think of them.

Modest proposal: Maybe we need a central clearinghouse for these ideas, modeled after the National Popular Vote Interstate Compact. We could list ideas, and people could sign onto them (or onto the “over my dead body” side, of course), but ideas on the list would be prohibited from taking up any actual time at WG21 meetings until a certain critical mass of supporters (and critical lack of objectors) was reached.

Notice that in theory, this is no different from how WG21 already works. Want to make something happen? Write it down (in a paper) and get a critical mass of supporters (coauthors) and mollify the opposition. And in theory, the National Popular Vote Interstate Compact is no different from how the U.S. Congress works. But in practice, there’s a difference — or at least it feels like there is one.