If I blog these math puzzles, I can close the browser tabs containing them and un-nerd-snipe myself…

Can the policeman shoot the thief? This is (claimed to be) a puzzle from the 1978 Moscow Math Olympiad. We have a square city of 2 by 2 city blocks (so, 3 north-south streets and 3 east-west streets). 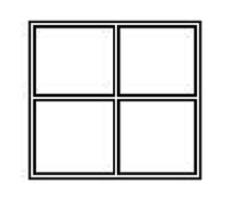 Suppose an (alleged) thief is moving around on these streets, somewhere in the city. There’s also a single policeman for the whole city; he can run 2.00001 times as fast as the thief can. Initially the policeman has no idea where the thief is, nor what the thief’s movement strategy is. Work out a strategy by which the policeman will eventually, inevitably, spot the thief.

Milo Brandt has written up a very complete solution.

Incidentally, suppose there may or may not be a thief in the city. How long does our policeman have to patrol the streets in order to conclude definitely that no thief is present? (Again, assuming that our policeman’s cruising speed is 2.0001 times the maximum speed of any hypothetical thief.)

The policeman also seems to have winning strategies in 3x3 and 4x4 cities, as detailed in the StackExchange answers.

Does the policeman have a winning strategy in the 5x5 city? The StackExchange answers show that the strategy, if it exists, must be non-trivial.

What about a 4x5 city? 3x5? 1xN? (Obviously the policeman has a winning strategy in every 0xN city — that’s a city with one Main Street and no side streets at all.)

If you discover anything non-trivial here, I encourage you to post it as an answer on StackExchange!