I was looking at HyperRogue again this week (see my previous post). It has a really nice localization framework: every message in the game can be translated just by adding a lookup entry to a single file (like, for the Czech translation, you add entries to language-cz.cpp); and then during the build process, all the language-??.cpp files are collated together and used to produce a single language-data.cpp file with a lookup table from each English message to the same message in every other language. (Seeing all the messages at once allows us to report on how “complete” each translation is, relative to the others.)

The other day I noticed that this build step — the compilation of langen.cpp, which #includes language-??.cpp — was taking about 12 seconds, which seemed ridiculously long. So I went looking into it, and managed to get the compile time back down to about 3 seconds. The huge slowdown was because of six functions (one per supported language) which looked essentially like this:

Since language-cz.cpp contains about 2000 Xs, what we end up with is a single function that contains 2000 consecutive calls to std::map::emplace. LLVM really does not like to codegen such a large function, even at -O0.

So I tried rewriting the langCZ() function into a single statement. That should produce less codegen, right?

This is because the expression

And that involves a non-trivial object with static storage duration! So the compiler generates a bunch of code (surrounded by a guard to make it thread-safe) to create std::string("a"), std::string("b"), and so on. And all those calls to string’s constructor end up being just as bad for LLVM’s code generator as the calls to emplace that we started with!

To actually eliminate the code, and make LLVM run fast again, we have to make sure that our big chunk of data is completely constexpr-evaluable, so that it won’t generate any instructions for LLVM to choke on. That is, we need something like this:

The difference here is that our big chunk of static-lifetime data is all const char *, not std::string — so the compiler doesn’t need to generate any instructions corresponding to all those string constructors. The same number of calls to string’s constructor will happen at run-time, but now they’re happening in a loop inside the range constructor of std::map.

I wrote a little benchmark comparing different ways of initializing a std::vector<std::string>. Here’s the result: 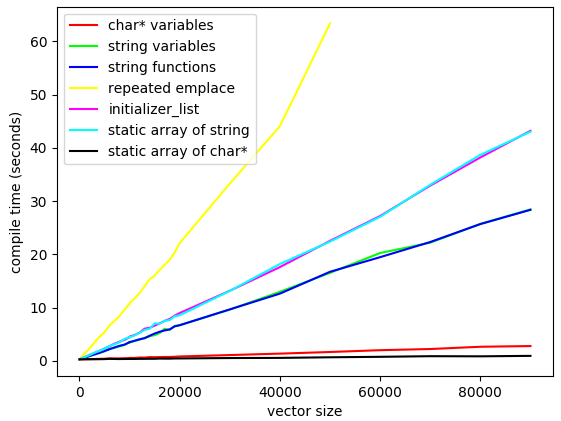 Near the bottom of the graph, the red line represents programs of the following form. This represents “no code”; we’re paying for a bunch of linker symbols and that’s all.

The green line in the middle represents programs of the following form. This represents the extra overhead of codegenning all those calls to std::string’s constructor. (Not the runtime cost — the compile-time cost of forcing LLVM to crunch through all those instructions!)

The case above causes LLVM to codegen a single massive function with all n of the initializations, which will be called the first time the translation unit is entered. For comparison, I also tested programs of the following form, which causes LLVM to codegen n tiny little functions. The blue line represents these programs. You can see there’s basically no difference between the green line and the blue line.

Now for the yellow line shooting upward at the top of the graph. It represents programs of the following form, which is essentially the original HyperRogue case.

The magenta line represents programs of the following form, using that secret static object of type std::initializer_list<std::string>. It’s an improvement over the yellow line, but it’s far from efficient.

The light cyan line overlapping the magenta line shows that if we naïvely rewrite the program to use an explicit static array of std::string, instead of initializer_list, absolutely nothing changes on the performance chart:

Finally, the black line all the way at the bottom of the graph represents programs of the following form. This source code looks exactly the same as the code above, but it makes sure to use const char * for our bulk data instead of std::string:

If you are already in that situation, try to refactor your X-macros to make your static-lifetime data trivial and to move the work into a runtime loop (such as a constructor taking an iterator range). You might see your compile time improve dramatically!

For more on the pitfalls of std::initializer_list, I highly recommend Jason Turner’s talk from C++Now 2018, “Initializer Lists are Broken — Let’s Fix Them.”