Just in time for Independence Day comes this news item from my alma mater:

Just as having one child cut the cake and giving the second child first choice of the pieces avoids either feeling envious, having two political parties sequentially divide up a state in an “I-Cut-You-Freeze” protocol would minimize the practice of gerrymandering, where a dominant political party draws districts to maximize its electoral advantage.

The CMU protocol, developed by Ariel Procaccia, associate professor of computer science, and Wesley Pegden, associate professor of mathematical sciences, is the first to allow a fair division of a state into political districts without independent agents. It calls for one political party to divide a map of a state into the allotted number of districts, each with equal numbers of voters. Then the second party would choose one district to “freeze,” so no further changes could be made to it, and re-map the remaining districts as it likes. The first party then would choose a second district to “freeze” from this map and redraw the remaining districts … until all of the districts are frozen.

Pegden and Procaccia acknowledge that their analysis assumes an idealized setting, but believe their protocol would have similar properties in the real world. 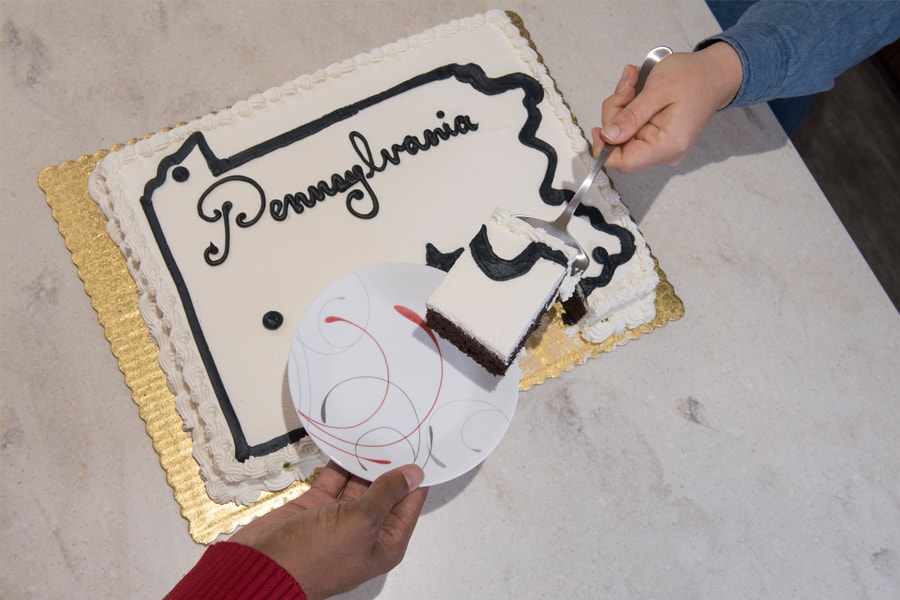 Study question 2: What is represented by the cake in this metaphor?

Study question 3: In the above diagram, which direction is the slice of cake moving?

Cake-cutting protocols are a well-known and long-studied topic in mathematics; Pegden and Procaccia’s approach is an iterated version of the “I-cut-you-choose” protocol. “I-cut-you-choose” is designed to produce envy-free divisions, but not necessarily “best” divisions by other metrics. Wikipedia:

One commonly used example is a cake that is half vanilla and half chocolate. Suppose Bob likes only chocolate, and Carol only vanilla. If Bob is the cutter and he is unaware of Carol’s preference, his safe strategy is to divide the cake so that each half contains an equal amount of chocolate. But then, regardless of Carol’s choice, Bob gets only half the chocolate and the allocation is clearly not Pareto efficient.

It is entirely possible that Bob, in his ignorance, would put all the vanilla (and some amount of chocolate) in one larger portion, so Carol gets everything she wants while he would receive less than what he could have gotten by negotiating.

Weak truthfulness means that if the partner reveals his true value measure to the algorithm, he is guaranteed to receive his fair share (e.g. 1/n of the value of the entire cake, in case of proportional division), regardless of what other partners do. Even if all other partners make a coalition with the only intent to harm him, he will still receive his guaranteed proportion. Most cake-cutting algorithms are truthful in this sense.

Strong truthfulness means that no partner can gain from lying; i.e., telling the truth is a dominant strategy. Most cake-cutting protocols are not strongly truthful.

(Here Wikipedia’s footnote points to the paper “Truth, Justice, and Cake Cutting” (2010), which shares two authors with the paper that produced our news item.)

Study question 5: Suppose now that you are the Republican Party, during a redistricting of a certain state into 10 districts. The population of the state is about 45% Democratic, 45% Republican, and 10% Green Party. The Democratic Party cuts first, and offers a set of ten districts — four solidly Republican, four solidly Democratic, one split 50/50, and one solidly Green. Which district do you choose to freeze, and why?

Study question 6: What should the Democratic Party have done?