Previously on this blog: the notion of a “meta-sudoku” puzzle as a configuration of 81 squares, each labeled “filled” or “unfilled.” The goal of the puzzle is to find an assignment of numbers to the “filled” squares so that the resulting (partially filled) grid is a solvable Sudoku puzzle.

Yesterday on this blog: a relatively brute-force solver that was able to prove that multiple distinct assignments existed for both the “moose” Sudoku configuration and the 17-clue configuration for which I had such high hopes.

Just now I realized that of course both of those grids had multiple solutions! 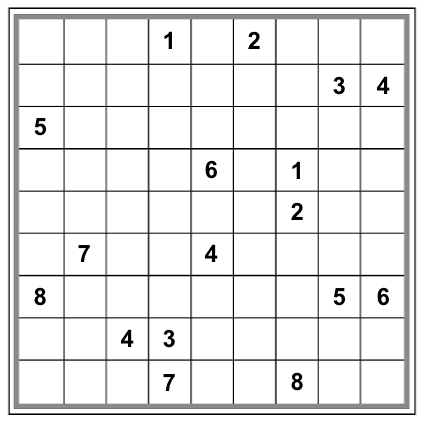 …which was indeed one of the four distinct grids found by my program.

So, just by looking at the configuration, without even filling in the grid at all, I should have known that neither the moose nor this particular 17-clue grid could possibly have a unique meta-solution! No complicated computer program needed!

Today I learned that Gordon Royle of the University of Western Australia maintains an exhaustive list of all known 17-clue grids (up to rotation of the numbers, and up to row/column swaps similar to those described above). His list currently has 49151 grids, representing 34446 meta-sudoku configurations. 26250 of these grids do not match the configuration of any other grid in his collection. 3227 of these configurations have “obvious” row/column swaps like what I just showed. I have set my program to investigate one of the other 23023 configurations.