The other day @NextRoguelike tweeted this game idea:

A mashup of Colossal Cave with a sandbox.

This branch of the Adventure family tree is best known today via Doug McDonald’s 551-point Adventure 6 (1990). (Sadly, the 751-point “New Adventure” written entirely by Long and distributed by CompuServe in the 1980s is lost forever as far as anyone — including Long himself — knows.)

Long’s version was heavily inspired by Zork (or MIT’s “Dungeon” program, as it was known back then). Starting from Don Woods’ source code, Long added a rudimentary health system, containers and containment, objects of different weights (and a puzzle based on weight), a vehicle, wearable items, adjectives, prepositions (PUT RARE BOOK IN SAFE), and multi-noun commands (GET BOOK AND LAMP, DROP ALL). All of this by extending Crowther and Woods’ original Fortran code! This was quite an impressive technical achievement, and makes for a rich and rewarding game — definitely my favorite branch of the Adventure tree.

But all this technical cleverness came with a price, or at least a funny little sidecar. Some of Long’s additions had little tiny bugs, which are exploitable by the player. As a result, many of the properties that were solidly “invariant” in Woods’ game are actually not invariant in Long’s.

Ever wanted to imitate Colossal Cave: The Board Game and bring the friendly bear back to the Well House? Well, in the Fortran original of MCDO0551, you can do it! 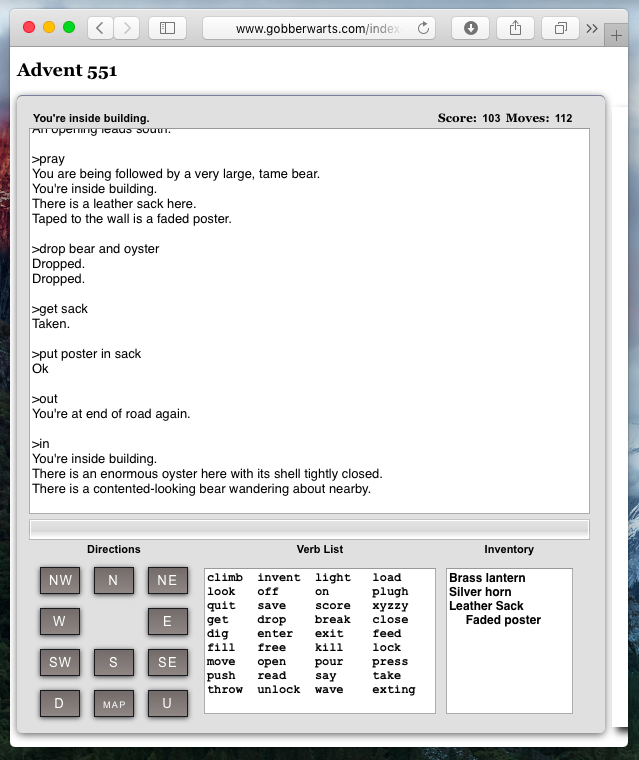 This screenshot comes from Scott Healey’s amazing emulation of the “bugs-included” Fortran game at gobberwarts.com. You can also download the Fortran source code from my repo and build it yourself. Finally, for those readers with no sense of whimsy at all, you can play my “bug-fixed” C port of MCDO0551 online here.

Puzzle: The screenshot above shows the bear and oyster (and, incidentally, nothing else) in the Well House on turn 112. Can you achieve the same feat in under 100 moves? Test your solution on gobberwarts.com.