Confessions of a Justified Sinner

I just finished reading The Private Memoirs and Confessions of a Justified Sinner (James Hogg, 1824). It’s fantastic. Wikipedia describes it as “part Gothic novel, part psychological mystery, part metafiction, part satire, part case study of totalitarian thought” — to which I’d add “part pointedly anti-Calvinist polemic” — and the book is just as complicated and fabulous as you might expect from that description. It’ll also teach you a bit of Scots dialect.

The work presents itself as the private memoirs of the titular sinner; but those memoirs are preceded by a 140-page “Editor’s Preface” and followed by a 22-page postscript. (Humbert Humbert, eat your heart out!) The so-called “Preface” in fact is an integral part of the story; it tells the story from one point of view, and then in the memoir we see the title character’s take. The identity of the title character is in fact a bit of a spoiler, but I can’t share quotes from the book without identifying him, so I guess stop here if you want to go read it completely unspoiled?

For a little spoiler space I can use the fact that in the middle of the memoir comes a little story about an “auld carl” named Robin Ruthven. I have no evidence to support my fantasy that this is where W.S. Gilbert got a couple of the names in Ruddigore, but I imagine that Gilbert would have loved Confessions of a Justified Sinner if he ever had read it.

The protagonist of the first part is one George Colwan, the mildly prodigal heir to a Scottish lairdship; the antagonist is his brother (well, half-brother) Robert Wringhim, black-clad preacher’s son, who creeps around making a greater and greater nuisance of himself until the climactic disaster — George’s death — and denouement. The preface is strangely resistant to pull-quotes: it’s all matter-of-fact narrative or at best situational comedy that develops over the course of many pages. Here we also find the famous literary description of a Brocken spectre.

In the second part — the first-person memoir — the whole story restarts with Robert as the protagonist and narrator. Robert is the classic loner full of resentment against his more successful “inferiors” and full of — as the title says — justification for his… well, “hatred” may not be too strong a term. The preface gives us the view from outside: senseless, incomplete. The memoir gives us the view from inside: thoroughly ironic, eventually pitiable. The intensity of the irony makes for easier pull-quotes.

As a boy, Robert is such a pious whiz at Calvinist doctrine (page 147)

that I astonished my teachers, and made them gaze at one another. I remember that it was the custom in my patron’s house to ask the questions of the Single Catechism round every Sabbath night. He asked the first, my mother the second, and so on, every one saying the question asked and then asking the next. It fell to my mother to ask Effectual Calling at me. I said the answer with propriety and emphasis.

“Now madam,” added I, “my question to you is, What is Ineffectual Calling?”

“Ineffectual Calling? There is no such thing, Robert,” said she.

“But there is, madam,” said I; “and that answer proves how much you say these fundamental precepts by rote, and without any consideration. Ineffectual Calling is, the outward call of the gospel without any effect on the hearts of unregenerated and impenitent sinners. Have not all these the same calls, warnings, doctrines, and reproofs that we have? and will any tell me that this is not Ineffectual Calling?”

“What a wonderful boy he is!” said my mother.

“I’m feared he turn out to be a conceited gowk,” said old Barnet, the minister’s man.

(It appears that Robert was not the only one to hit on the punny if mildly blasphemous-sounding notion of “ineffectual calling.” The phrase starts showing up in Google Books results for annotated catechisms circa 1767.)

Robert knows he’s a sinner and wishes he could repent, but finds it (according merely to God’s infinitely wise plan) impossible for him to do so. Page 171:

Upon the whole, I think I had not then broken — that is, absolutely broken — above four out of the ten commandments; but for all that I had more sense than to regard either my good works or my evil deeds as in the smallest degree influencing the eternal decrees of God concerning me, either with regard to my acceptance or reprobation.

That is, the Calvinist notion of predestination (that God foreordains everything that is to happen in this life or the next, and to whom) leads naturally to the idea of infallibility of the elect (that a person who is assured of salvation cannot later become hell-bound, because God doesn’t change His mind about these things). This doctrine is repeated like a drumbeat through the second half of the book.

Sometime around here, Robert’s adoptive father informs him that Robert has made the grade — as a committed believer in the true faith, he is saved, and by God’s grace will never fall again. That same afternoon Robert has his first encounter with a strange young man he knows only by the name “Gil-Martin.”

Gil-Martin has an oddly chameleonic physical appearance, a knowledge of theology rivaling Robert’s own, and an utterly persuasive way with words. Most importantly, Gil-Martin shares the pillars of Robert’s faith — in some ways he’s even more radical. Somehow Robert develops a conviction that Gil-Martin is in fact the great prince Peter of Russia, traveling incognito. Page 219:

“I never go but where I have some great purpose to serve,” returned he; “either in the advancement of my own power and dominion, or in thwarting my enemies.”

“With all due deference to your great comprehension, my illustrious friend,” said I, “it strikes me that you can accomplish very little either the one way or the other here, in the humble and private capacity you are pleased to occupy.”

“It is your own innate modesty that prompts such a remark,” said he. “Do you think the gaining of you to my service is not an attainment worthy of being envied by the greatest potentate in Christendom? Before I had missed such a prize as the attainment of your services, I would have travelled over one half of the habitable globe.”— I bowed with great humility, but at the same time, how could I but feel proud and highly flattered?

Gil-Martin persuades Robert to act as a warrior of the Lord, rooting out and destroying heresy and evildoing. (In modern terms, we would say that Gil-Martin “radicalizes” Robert.) After some preliminary actions, Robert is persuaded to do away with his profligate and libertinous brother George, which Gil-Martin terms a “kind office; for … be assured of this, that the sooner he falls, the fewer crimes will he have to answer for, and his estate in the other world will be proportionally more tolerable, than if he spent a long unregenerate life steeped in iniquity.” (Sophistry worthy of Boethius.)

“Nothing can be more plain or more pertinent,” said I: “therefore I fly to perform that which is both a duty toward God and toward man!”

I prayed inwardly, that these deeds of mine might never be brought to the knowledge of men who were incapable of appreciating the high motives that led to them.

Robert inherits the lairdship, but his misgivings toward Gil-Martin grow stronger. He wakes from binges to find months gone and new crimes committed. It is rumored that he has murdered his own mother. He flees his estate; he grows to dread the sight of Gil-Martin; he becomes quite a pitiable character, in the end. 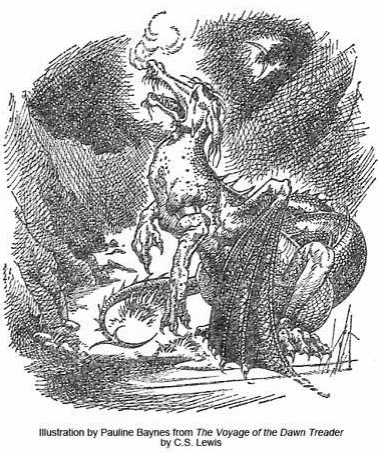 Reading the latter part of Confessions of a Justified Sinner, as Robert starts to feel the snares around him, I found myself thinking of that chapter of The Voyage of the Dawn Treader in which Eustace Scrubb (another self-righteously priggish type) turns into a dragon overnight without realizing it. Poor Eustace, trapped between dragon claws on both sides! Poor ugly dragon-Eustace, crying hot tears under the moon as that coveted gold bracelet presses painfully into his arm!

The difference is that Dawn Treader (being a book for children) grants poor sinning Eustace a clear route to salvation, whereas Confessions (being a book for adults) refuses to let the reader off the hook. No clean resolution, no way out, for Robert. The only way out is not to get in.