This week I’ve been reading John Caius’s De Canibus Britannicis (1570), or rather, Abraham Fleming’s 1576 translation titled Of Englishe Dogges. The most immediately notable thing about the Project Gutenberg text is that it faithfully reproduces all the spelling quirks of the original’s Elizabethan English, including the indistinction of u and v (“reuenge”, “vpon”) and even the occasional use of scribal abbreviations to save space in the column (“thẽ” for “them”; “ye” for “the”). Besides these paleographic quirks, it also contains some fun facts about dogs.

The author lists dogs of many occupations, from the spaniel, terrier, and shepherd to the gazehound and bandog. However, of

the Dogge called the fisher […] which seeketh for fishe by smelling among rockes & stones, assuredly I knowe none of that kinde in Englande […] except you holde opinion that the beauer or Otter is a fishe (as many haue beleeued) & according to their beliefe affirmed […]

That is, if you hold that the otter is a species of fish, then the English otterhound would qualify as a fisher-dog. (By the way, Google SafeSearch assures me that the “English beaverhound” is not a thing.)

For more on the Lenten acceptability of beaver meat, see these stories by NPR’s Alan Greenblatt (February 2016) and Dolly Jørgensen (April 2014). For additional background info on Aelian’s beaver tale linked below, see “On the time I drank castoreum” (Dolly Jørgensen, July 2013).

Maybe the beaver is a fish (especially for purposes of Lent), or maybe it itself is a kind of dog.

I am not ignorant of that both Ælianus, and Ætius, call the Beauer κύνα ποτάμιον a water dogge, or a dogge fishe. I know likewise thus much more, that the Beauer doth participate this propertie with the dogge, namely, that when fishes be scarse they leaue the water and raunge vp and downe the lande, making an insatiable slaughter of young lambes vntil theyr paunches be replenished, and whẽ they haue fed themselues full of fleshe, then returne they to the water, from whence they came.

Yes, you read that right. The beaver when famished will leave the water and prey on sheep! (In real life, beavers are strictly herbivorous and dine primarily on tree bark.)

In the same paragraph Caius etymologizes the word “seal” as a contraction of “sea veal,” that is, “sea calf.” (In real life, seal comes from the same Germanic root as selkie, and vastly predates the mutation of Latin vitellus into French veau.)

One type of working dog you don’t see anymore:

In latine Aquarius in Englishe a water drawer. And these be of the greater and the waighter sort drawing water out of wells and deepe pittes, by a wheele which they turne rounde about by the mouing of their burthenous bodies.

(In modern times, the term “water dog” means something like a retriever or spaniel — which Caius also mentions, under “water Spaniell, or finder, in Latine Aquaticus seu Inquisitor.”)

Similarly out of fashion is the kitchen turnspit dog:

whẽ any meate is to bee roasted they go into a wheele which they turning rounde about with the waight of their bodies, so diligently looke to their businesse, that no drudge nor skullion can doe the feate more cunningly.

Which barcke only with free and open throate but will not bite;

Which doe both barcke and byte;

Which bite bitterly before they barcke.

“The first are not greatly to be feared, because they themselues are fearefull, and fearefull dogges (as the prouerbe importeth) barcke most vehemently.”

Caius finishes with a whole list of more or less dubious etymologies. For example:

The Grehounde […] hath his name of this word, Gre, which word soundeth, Gradus in latine, in Englishe degree. Because among all dogges these are the most principall, occupying the chiefest place, and being simply and absolutely the best […]

The etymology of greyhound is actually fairly interesting. The Online Etymology Dictionary says that the first element is not related to the color grey, but rather stems from a Norse term of unknown origin meaning “female dog.” The latter word appears in a famous tweet-sized couplet by Hjalti Skeggjason (fl. 1000), Icelandic pioneer of Christianity: 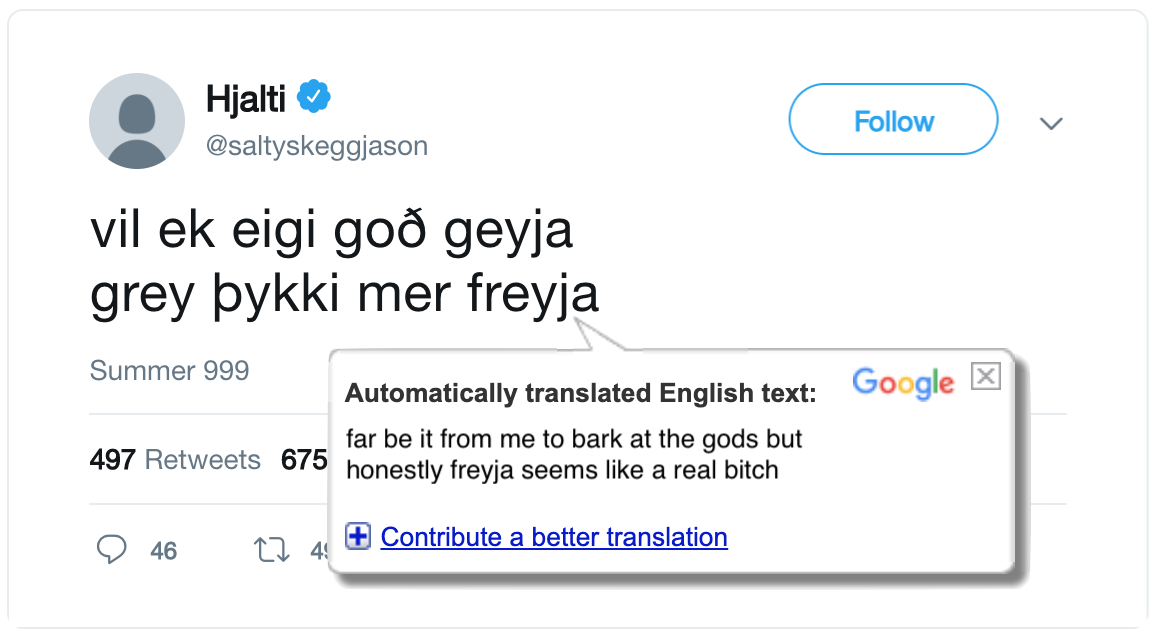