The other day I discovered that Puzzling StackExchange has a few “Homeworlds puzzles” — just like chess puzzles, but using the game of Binary Homeworlds instead of chess.

After spending much too much time trying to solve Sleafar’s “mate in 4” puzzle from 2017 (my conclusion: unsolvable as far as I could tell), I decided to try my hand at creating a puzzle. In fact, I created two! Here’s the first of them.

Two things were indispensable: my physical Homeworlds set and my computerized position explorer. I wrote a quick and dirty program to verify the properties I wanted my puzzle to have — most importantly “has exactly one move leading to checkmate,” but also “has at least one of these various kinds of move, which all lead to check-but-not-checkmate.” Then, as I moved the pieces around in meatspace, focusing on one snippet of the problem at a time, I would type the position into the computer to quickly check that I hadn’t lost some other desirable property by accident.

Of course, if you have access to a computer program like mine, “solving” a puzzle like this one becomes completely trivial! The enjoyment in this puzzle — if any :) — will come from solving it without computer assistance.

For those who want to get a physical Homeworlds set like mine, your best bet right now is Looney Labs’ Pyramid Arcade (or buy on Amazon). They once sold sets suitable for Homeworlds under the name “Rainbow Stash”; but that’s been out of print for a long time. Still, there’s good news for Homeworlds fans: Looney Labs will start selling dedicated standalone Homeworlds sets circa October 2020!

All credit for the lovely image below is due to Sleafar on Puzzling StackExchange, who created an SVG image template where each piece is a different grouped entity that you can just drag around in an SVG editor until it looks right. The wonders of modern technology!

I used Boxy SVG, a JavaScript-based online SVG editor, to do the dragging-around. (Back when I was working on Colossal Cave: The Board Game, I knew how to use Inkscape; but those brain cells have died.) Boxy lets you upload SVG files from disk; it requires registration in order to download images as SVG or even as PNG. For my purposes, I just took a screenshot and cropped it. 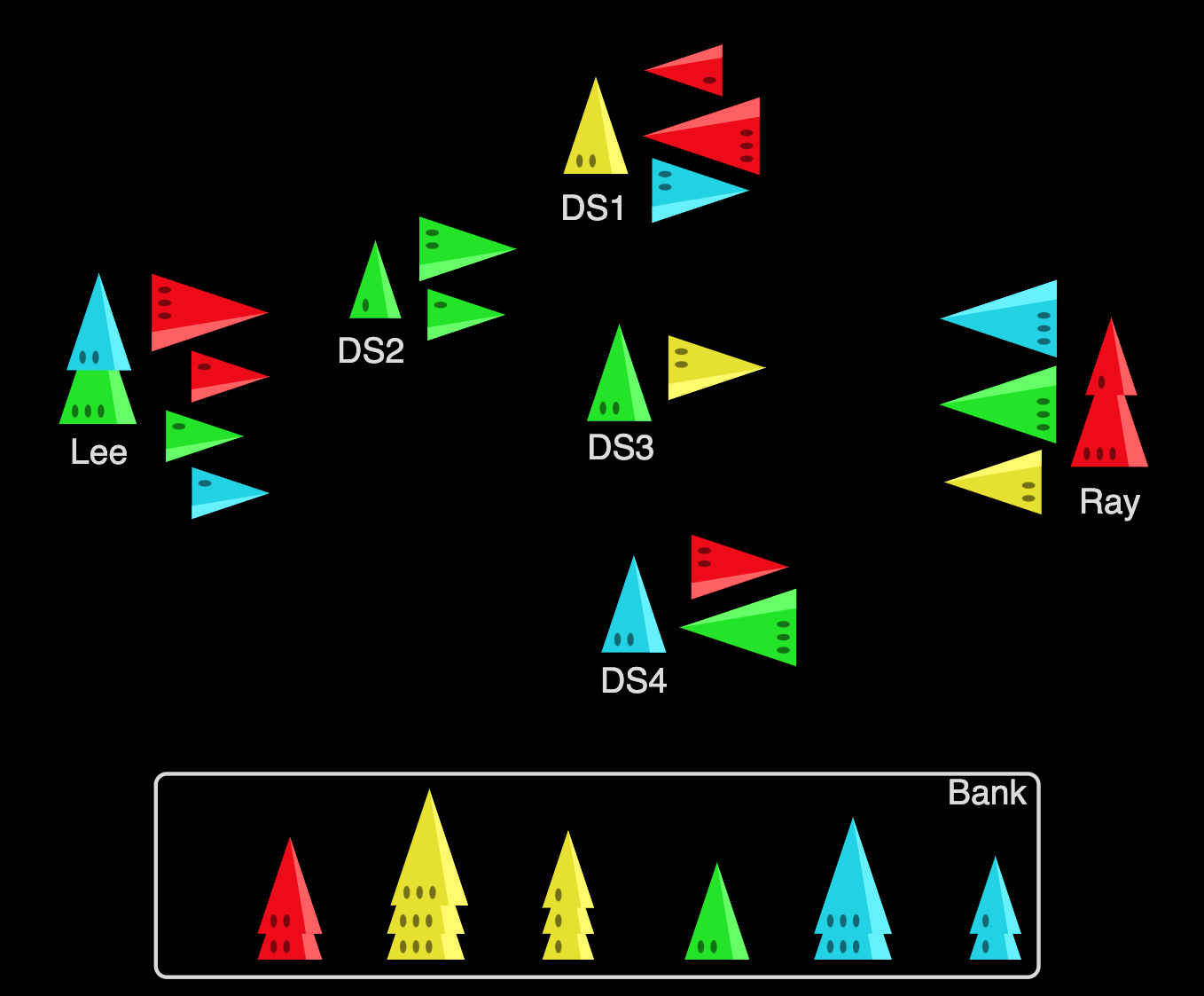 Ray’s red homeworld is armed to a frankly ridiculous degree, but all for naught: Lee’s mini-Doomsday-Machine is almost complete and his victory is assured.

Lee to play and mate in 1. (That is, you must find the unique move which Lee can make, such that no matter what Ray replies, Lee will win on the very next turn.)

For the solution, see the discussion of this puzzle on BoardGameGeek.