The STL is more than std::accumulate 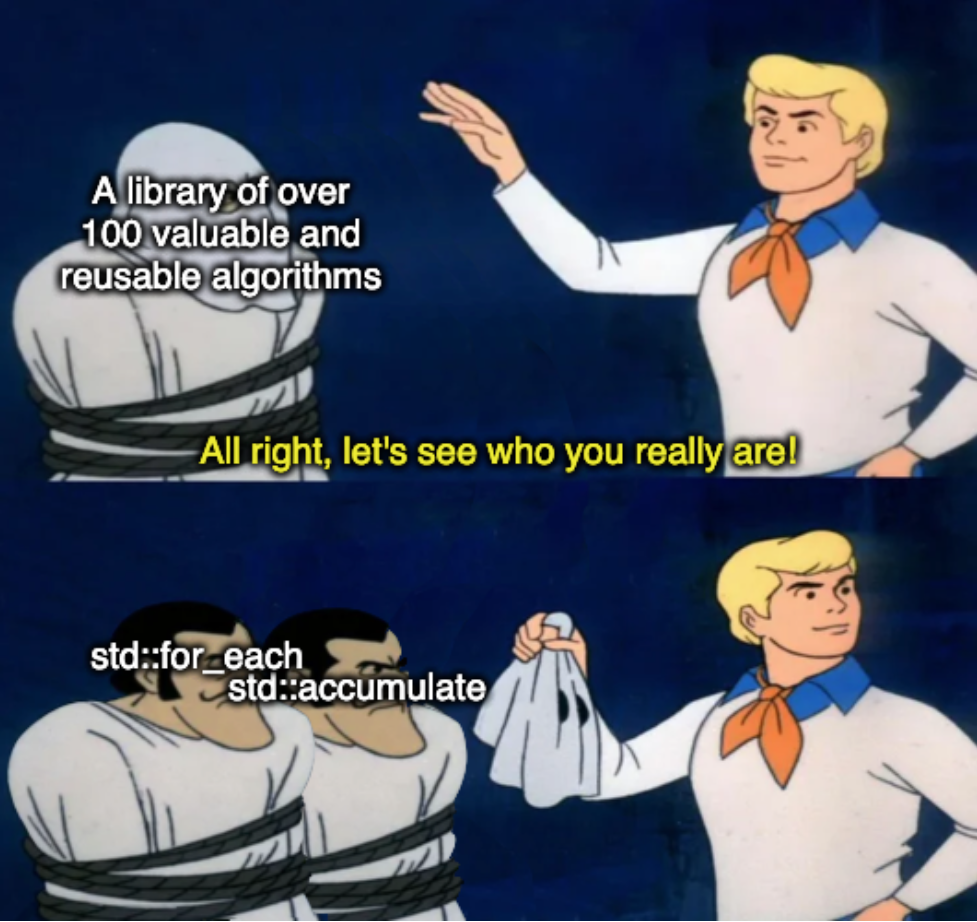 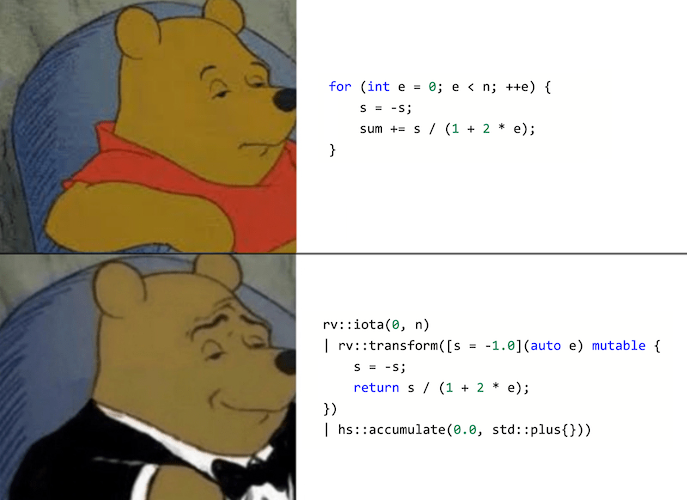 Let’s look at two examples of “using STL algorithms” in this limited sense, and how we might solve the same problems differently (maybe using the STL, maybe not). Both of these examples are taken from Conor’s CppCon 2020 talk “Structure and Interpretation of Computer Programs: SICP.”

Circa 36m55s, Conor finishes polishing a function to compute the sum of the squares of the two largest integers in a list.

“This code makes me really happy. Some would argue that it’s not as nice as a for loop, and I would have to vehemently disagree.”

To me, that’s not “STL” code; that’s just open-coding with extra steps. You know how in a pre-Coroutines world we have to maintain the “state” of our state machine by hand? That’s basically what we’re doing here, via acc — it’s just a manual way of managing the local variables a and b in a way that can be threaded through accumulate. We could use for to write that exact same algorithm much more simply:

Meanwhile, here’s what I would call the actually “STL classic” solution to Conor’s puzzle:

This directly translates the problem statement: “Copy v’s top 2 elements to top; then compute the sum of the squares of top’s elements.”

You’re probably wondering why I bothered to write std::end(top) when I could have written top+2, right? Well, I wanted to highlight that it is trivial to extend stl_solution to compute the sum of squares of the top 3 values, or the top 10 values. All you have to do is change the bound of the array variable top in one place. Everything else in this (three-line) function just keeps working. Consider how much you’d need to change either of the open-coded solutions to sum the squares of, say, the top 10 values.

Circa 49m38s, Conor presents this implementation of a pi-calculating algorithm:

At 52m42s, there’s an “iteratively refined” version of the same algorithm. Conor doesn’t explicitly say so, but the big advantage of this version over the previous is that this one produces decent codegen.

Notice that this code has the same overall outline as the “sum of squares” program: we’re iterating over our input sequence and mutating a manually managed “stack frame” of variables (in this case just s) which conceptually live outside the loop.

And we could re-obfuscate the code using std::accumulate like this:

All of these versions have basically the same codegen at -O3 (but of course the non-Ranges version IMP3 is vastly faster to compile).

By the way, you don’t need mutability just to get a repeating sequence of +1, -1 in range-v3. You could use rv::cycle, like this:

However, if you do this, then again the codegen suffers, compared to the baseline for-loop (IMP3) or the two “manual stack frame management” solutions (IMP2, IMP4).

Is there a “classic STL” version of this algorithm? I don’t think so, because it’s really just a numeric operation: it takes in one number (not a collection of elements), and it produces one number (not a collection). I think IMP3 is the best solution, not just because its codegen is better, but because it most clearly explains what it’s doing. The closest I can get to a “classic STL” solution would be, like,

But this is obviously not an acceptable solution, because it heap-allocates for a problem (computing pi) that fundamentally doesn’t require heap-allocation.

Here are the line counts I saw for each version of leibniz_pi_approximation on Godbolt, using GCC 10.2 at -O2:

By the way, I think the problem with IMP1 is that the parameter to rv::chunk(2) is a runtime function parameter, whereas we really want it to be a compile-time (template) parameter. If there were an rv::chunk<2>(), we could eliminate a whole heap-allocation there. Something like this:

This modification chops IMP1’s codegen from 219 lines to 176 — in the vicinity of IMP6 — but it’s still an order of magnitude worse than the “good” versions.