How do C++ using-directives work?

Recall that in C++ there’s a difference between a using-declaration and a using-directive.

A using-declaration is semantically similar to a declaration; it introduces into the current scope a new meaning for a name. If that name already had one or more meanings from outer scopes, those existing meanings are hidden, or shadowed, by the new declaration. Godbolt:

The declaration of foo in Inner hides, or shadows, the previous meaning that foo had had; so when we look up the name foo inside test1, we find only Inner::foo. We don’t even consider Outer::foo as a candidate.

The using-declaration of foo in test2 hides, or shadows, the previous meaning that foo had had; so when we look up the name foo inside test2, we find only AnimalUtils::foo. We don’t even consider Inner::foo as a candidate.

(So how does the std::swap two-step work? Well, besides the normal unqualified lookup, we also do a separate argument-dependent lookup, and merge the two candidate sets. So in this particular case, overload resolution would also consider any meanings of foo declared in namespace Zoo. But there is no such foo in this example.)

Using-directives are subtler than using-declarations. But the good news is that you should never use them! Seriously, don’t ever write using namespace Whatever; and then you won’t have any trouble with them. Just pretend they don’t exist.

But, let’s talk about them anyway.

Alternatively, start tracing a “fully qualified path” downward from the root; the lowest common ancestor corresponds to the longest common prefix of these fully qualified names. For example, consider this hierarchy of namespaces:

So, consider this snippet of C++ code (Godbolt):

You might reasonably expect that when test passes a Lion to foo, it would result in a call to NA::foo(Lion), because we “using-directive’d” namespace NA. Or at least it might call NB::foo(Lion), since that’s what would happen in the absence of any using-directives at all. But in fact it calls N1::foo(Cat)!

As shown in the diagram below: using namespace N1 causes a declaration of N1::foo(Cat) to be injected into the least common ancestor of N1 and N2, which is NC. This declaration of the name foo hides any and all meanings of foo introduced in higher-up scopes, such as NB::foo(Lion). 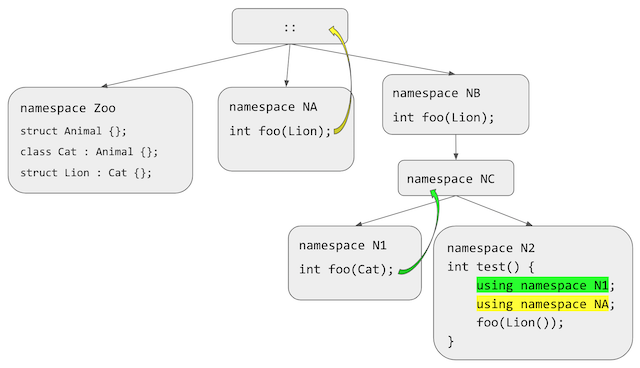 By the way, even though the declaration of N1::foo has been injected into NC, you can’t actually refer to it as NC::foo. It has been injected only for the purposes of unqualified lookups — and only for the purposes of unqualified lookups that happen within this scope. Nobody outside of the scope of test is going to “see” that declaration of foo injected into namespace NC.

It’s bad for three reasons. Number one, it fails to use the hidden friend idiom for swap(Impl&, Impl&). Number two, it uses using namespace std. (Both of these are red flags that should insta-fail any code review you do.) Number three, its use of using namespace is wrong in terms of the “std::swap two-step.” (See “What is the std::swap two-step?” (2020-07-11).) In the two-step, we want to bring the meaning of swap from namespace std into our current scope, so that swap(x, y) will consider that meaning in addition to any meaning assigned by ADL. But what we’re doing here, instead, is to bring the meaning of swap (and every other name in std) from namespace std into the least common ancestor namespace of std and detail; i.e., into the global namespace.

So when we try to instantiate example<int>, unqualified lookup looks for declarations of swap in our current scope working outward, and it finds detail::swap(Impl&, Impl&) and stops there. It never finds the templated std::swap declared in the global namespace. Oops! That’s why the correct version of the std::swap two-step uses a using-declaration and not a using-directive.

You can also put a using-directive at namespace scope, like this (Godbolt):

And how does all this interact with inline namespace? Well, let’s save that for another day.

Some of these examples probably surprised you. I hope the explanations made sense anyway, in retrospect. But is any of this information useful to a good C++ programmer? I would have to say no it is not. Good C++ programmers don’t use using-directives — and I hope this blog post has convinced you to join them!

As for why using-directives work in this bizarrely unintuitive way, I’ve asked that question over on Stack Overflow. So if you’ve got a good answer, that’s a great place to type it up!