Homeworlds: Analysis of an Opening Gambit

This post is about Binary Homeworlds, the “space chess” game invented by John Cooper and popularized by (among others) Andy Looney. You can play Homeworlds online via email at SuperDuperGames, and, as of this year, in real time at Homeworlds Live. Jonathan Baker runs an annual tournament, which is happening as we speak.

In one of my tournament matches I observed an interesting opening gambit. In Homeworlds, the early game is all about the economy. The players are (frequently) racing to build the first medium ship. Jonathan Baker has described an aggressive opening tactic called the “Instafreeze”: when Lee’s homeworld contains a small piece, Ray can take the second small as well as a big ship in that color, thus freezing Lee out of that color unless Lee trades his large ship. 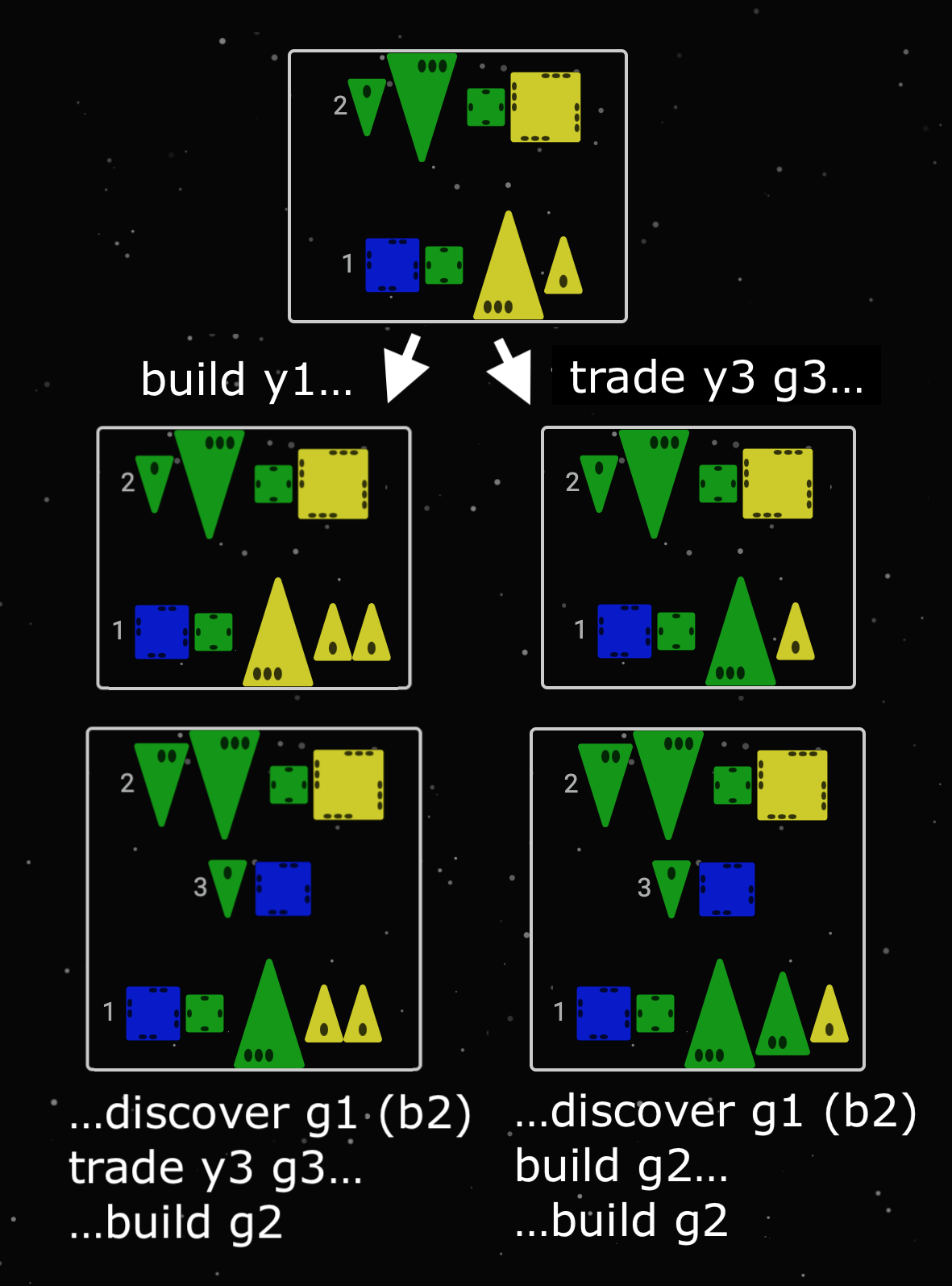 The instafreeze happens during setup, and is driven entirely by Ray; Lee’s role is simply reactive. This next gambit — the one I noticed in the tournament — is set in motion by Lee, and is interactive. But it begins similarly: Lee’s homeworld contains a small piece, and Ray is going to use that to threaten a jump-start on that color’s economy.

This gambit works with either red or yellow, but right now I’m going to present it in red, for the sake of concreteness.

When Lee’s homeworld contains r1, Ray can (either deliberately or coincidentally) avoid red in his own homeworld. Ray’s natural second move will be to swap for r1, that being the one color he doesn’t yet own. This leaves a single r1 in the stash. Ray’s third move, if Lee lets him, is to build a second r1 at home. Boom! Lee is frozen out of red — and Ray has only two reds at home, meaning he’s safe to build r2 on his fourth move!

If Lee notices that his own homeworld contains r1, and Ray’s has no red, then on turn two Lee can trade for r1 — a color already present at his homeworld! This leaves a single r1 in the stash. Gambit offered.

If Ray trades for r1 (remember, this would be a perfectly natural second move), gambit accepted. Lee gets to build the first r2 — but Ray gets to build r2 right afterward. We expect a flurry of trades and builds (“trade r2 for…; build r2; trade r2 for…”) as both players rapidly develop a fleet of medium ships.

Alternatively, Ray might decide that rapid development isn’t his style, and respond by building another small in the color he’s got; or by trading instead for r3, which keeps Ray in the red economy without actually opening up the r2s for Lee. (And Lee certainly isn’t going to open them up for Ray!) Gambit declined. In this case, Lee has maybe lost a little time; but he’s shut off Ray’s path to a quick r2, and I think it ends up pretty even. The development continues much more “quietly” than if Lee’s gambit had been accepted.

Here are two representative game trees — one in yellow, one in red. In both cases, player 1 (South) was the first to move. On the left: happy path for North. In the middle: Gambit declined. On the right: Gambit accepted.

Here are the results, enumerated and tabulated: