Earlier this week I posted that the source code for Castlequest (Holtzman and Kershenblatt, 1980) had been found — “Castlequest exhumed!” (2021-03-09). By now it’s totally playable (at least if you have the ability to install GNU Fortran).

I had been seeking Castlequest because I had fond memories of the game on GEnie. I vaguely remembered the wandering werewolf, and the vampire in the attic that you have to kill with a tomato stake before the sun sets… But it turns out that the game is actually much much longer than I ever knew as a kid! I’m going to try the “All the Adventures” thing here, and describe my experience replaying the game this week.

This post contains major spoilers for all plot points and puzzles!

For softer spoilers, you might check out this thread on IntFiction.org where some people are playing through the game, asking and giving hints as they go.

Immediately prior to playing, I’d just spent three days transcribing the source code, so I’d seen literally every line of the game — and yet I was still relatively unspoiled. Where Crowther and Woods’ Adventure uses a lot of comments and mnemonic variable names, Castlequest tends to use opaque numbers. Here’s Adventure:

Both games use a smattering of named global variables: Adventure has CLOSED, Castlequest has SHUTTR and WIND1. But Adventure also uses mnemonic names for its items (BIRD, ROD) and named predicates such as HERE(SNAKE) in lieu of most room numbers, whereas Castlequest uses simple magic numbers (25 for the flask of acid, 1 for the bedroom). Finally, Adventure uses named helper functions such as TOTING(ROD) and DSTROY(SNAKE), where Castlequest open-codes ITEMS(25) .NE. -1 (-1 being the magic “in my inventory” room number) and ITEMS(25) = 0 (0 being the magic “nowhere/destroyed” room number).

So I was spoiled really only in that I’d seen all the messages (so I knew to throw acid on the bars, and I knew to melt the glacier and give something smokable to the cyclops and tie the rope to the bed), and in that I had seen all the verbs and nouns in the game, like, once. As for how all the rooms would connect together, I was totally in the dark.

The early game (a.k.a. what I knew from GEnie)

It’s mildly noteworthy that the instructions are split onto three pages. The second line of the instructions is lifted straight from Adventure: “I will be your eyes and hands. Direct me with commands of 1 or 2 words.” Holtzman was a fan of Adventure, but had never seen its source code; therefore (as we’ve seen) the code of Castlequest looks pretty different. (I’ll do a post on the code sometime.)

You awake in aforementioned remote castle:

The game doesn’t recognize GET as a verb, so you have to TAKE everything. T is recognized as a shorthand. We can LOAD the gun with the bullet in order to SHOOT any wandering werewolves that pester us.

The exits of the castle’s rooms are all clearly and un-trickily marked; we quickly map the bedroom, hallway, parlor, armory, dining room, kitchen, pantry, foyer, workshop, smoking room, laundry room, storage room, upstairs hallway, library, boudoir, L-shaped corridor, and mirror maze. Yes, this castle (or Victorian mansion or whatever it is) comes with a mirror maze! But the maze is just one room, and wandering randomly always seems to lead you out into a random room of the castle — never anywhere new.

In the process, you find a silver cross and a Cuban cigar; the gun-with-silver-bullet, a bloody axe, some tasty food, an empty bottle (did I mention Holtzman was a fan of Adventure?), some “reusable matches” and kerosene, writing paper and a quill pen, and a book in the library that you can’t seem to do much with.

However, there must be something special about this book.

The trick is that you have to type OPEN BOOK. If you think to do that:

Oh, also, there are six rooms outside the mansion, including a garden where you find a tomato stake handily lying about, and a moat with a rowboat, which you can cross by doing TAKE BOAT and then CROSS MOAT. But on the other side all you find is a sign that says “You can’t reach the village from here”; and it seems to be telling the truth.

I am fairly confident that I, as a child, never said OPEN BOOK and therefore never found the skeleton key at all, which means the only other room in the game I ever saw is the attic entrance:

If you don’t figure out the skeleton key, this is all of the game you will ever see. And that’s exactly what happened to me as a kid! I wonder if this game would have been so memorable if I hadn’t felt so stumped. (The other game that fascinated me in that way was David Malmberg’s World’s Hardest Adventure, which I later disassembled to find that as a kid I’d seen the whole thing and it was just literally impossible to win.)

But notice: we have a stake and we have a vampire bat, and we know that “the object of the game is to find the master of the castle and kill him.” Even though I never managed to solve the puzzle of the bat, I assumed I knew how the game would play out.

Boy, was I wrong.

Now that we have the skeleton key from the book, we can open a boarded-up door in the kitchen:

(Why does our skeleton key work on a boarded-up door? And why doesn’t chopping with the axe work? I don’t know. More on Castlequest’s handling of doors and windows in that code post, whenever I get around to writing it.)

Now let’s go back toward the bedroom:

This secret passage for some reason triggers only when you are carrying the key. Down here are another ten rooms, including a torture chamber occupied by a nasty hunchback who seems to work just like the bear in Adventure — you can THROW FOOD and then TAKE HUNCHBACK to have him follow you around. (He doesn’t seem to do anything except ward off one werewolf attack and then die.) Item-wise, we find a flask of acid, an acetylene torch, a rope, and “a small pool of blood.” We can FILL BOTTLE from the pool — did I mention Holtzman was a fan of Adventure? — and then:

We use the combination from the kitchen. (Mark Kershenblatt tells me that 8-31-59 is Mike Holtzman’s birthday. Compare David Long’s New Adventure, in which a safe is opened with the combination 7-22-34 — the date John Dillinger was shot.)

Castlequest doesn’t play around with random numbers here. If you walk in the dark, you’re dead! And when you die, your inventory is scattered randomly about the house — which is so annoying to deal with that I can’t imagine anyone not just restarting (or restoring to their last save) on death.

Restart or restore, get the brass lamp from the cedar closet, and try again:

Remember the dim corridor outside our bedroom? There was a door to the west there, but it was locked. Going upstairs from the parlor takes us back to the dim corridor, unless we’re carrying the key, in which case it dumps us in the secret passage. So we have been unable to try the key on that locked door.

But now, exiting the mirror maze takes us somewhere different!

Well, hang on. Wasn’t the object of the game to find the master of the castle and kill him? Didn’t we do that a while ago? Did the game’s instructions lie to us?

This is a good place to exercise the game’s SAVE command, by the way.

Climbing the waterfall leads to a dead end whose scenery rivals Adventure’s Volcano View. Meanwhile, throwing water on the wall of fire lets us pass to find a… hotel lobby? With… elevators? In the basement we find what might be our new objective:

So far we’ve found a silver cross, a Cuban cigar, and a gold statue in the house, a jade figure and a bottle of champagne in the cave. North of the lobby is a sort of Y2 room that lets us teleport back to the boudoir by saying POOF. Next to the Blue Room is a maze of winding little passages.

This maze is a cute (if diabolical) twist on Woods’ “maze of twisty little passages, all different.” The rooms’ interconnections are pretty much nonsensical, but each room’s description is slightly different. Also, it can be mapped the same way as Crowther’s “all alike” maze: by dropping items. 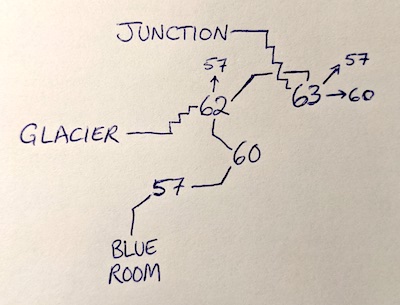 One exit from the maze is “four tunnel junction,” near which we find a sparkling sapphire. The other exit is the glacier room:

We can use our acetylene torch to melt a hole in the glacier:

Don’t MELT ICE a second time or you’ll flood the cave! Also, it is probably important to EXTINGUISH both the match and the torch afterward; these matches are somehow “reusable,” but they do eventually exhaust themselves after burning for a long time. (So you can’t explore the whole cave just on matches; you need the lamp too. If the lamp starts getting dim, you can refill it with kerosene from the storage room.) Anyway, inside the glacier we find our seventh treasure: a delicate crystal swan.

Up the steep trail from the glacier room (I notice this cave is full of “trails” and “paths,” as opposed to Crowther’s “crawls” and “canyons”) we find the underside of the tomato garden, and eventually (if you remembered to bring the key) we come out again above ground:

Go back through the mansion and cross the moat again and take the boat down into the cave through the cellar! With the boat, you can CROSS under the waterfall to find an island with a large ruby.

(The rowboat won’t POOF upstairs — just like the emerald in Adventure — but you can carry it up the stairs just fine.)

But I seem to have run out of areas to explore, again. To be continued…