Via Hacker News: lecture notes from several of Tim Roughgarden’s courses at Stanford, particularly CS269I “Incentives in Computer Science.” They’re worth reading from start to finish. Here are two gems I thought were especially neat.

From Lecture 7: Suppose a heavy weight is suspended from a fixed hook by a system of springs and strings. (A string’s length is constant as long as it carries any load; a spring’s length is roughly proportional to the load it carries.) The springs and strings are interconnected among themselves in some clever way, but ultimately they all end up connected to the fixed hook at the top, and all connected to a single point on the weight at the bottom. So the whole assembly is pretty much vertically linear.

Now find one of the strings and cut it. If it was carrying no load, then we expect nothing to happen. If it was loaded, then its load is suddenly redistributed among the other strings and springs, in some way that depends on how the system is interconnected. We might reasonably expect the weight to drop a little bit further down as a result. (Or crash to the floor, if the string we cut was the min-cut.)

But would you think that the weight could rise as a result of cutting one of the loaded strings? It turns out that it totally can — and here’s video proof!

The trick is that the loaded string is the last thing keeping two springs in series; cutting the string puts the springs in parallel, where they can each take half the load, and become shorter as a result. Here’s Tim Roughgarden’s diagram of the situation: 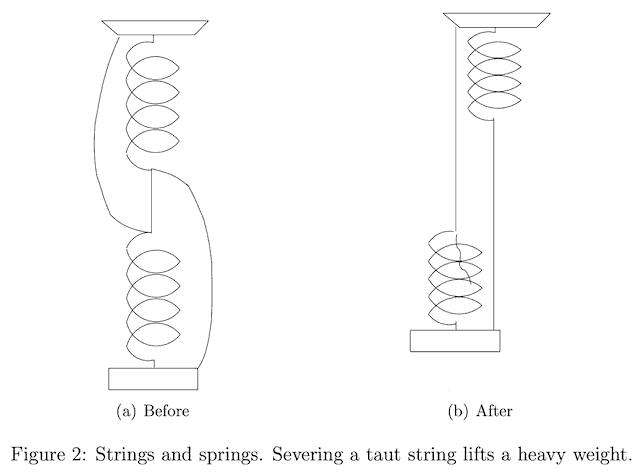 Vice versa, if you start with the system on the right, you’ll find that “hitching up” two pieces of the system with a short piece of string causes the weight to drop further down. (Anyone got a video of that?) This paradox has practical applications for the design of roads and other networks: Counterintuitively, adding a few high-speed links might alter traffic patterns so that the whole network gets slower, and removing a link might make a slow network faster. Of course, it might not work that way either — certainly we don’t want it to work that way, if we do our jobs right — but the paradox shows that we really need to think about how to do it right.

From Lecture 10, another paradox involving “Herding and Information Cascades.”

Obviously the first player should just guess the color of the ball they observed; they’ll have a 2/3 chance of guessing correctly. The second player, knowing this, will have the benefit of two independent observations: Player 1’s and his own. If his observation agrees with Player 1’s (both red or both blue), obviously he’ll guess that color; if his observation disagrees, then we’ve got one red ball and one blue, so he might as well guess the color he observed. Player 2 ends up always guessing his own ball’s color, and thus also guesses right 2/3 of the time.

The results are that each individual player maximizes their chances of guessing correctly; and in fact the expected value averaged over all the players goes up as well; but the distribution of outcomes changes drastically. 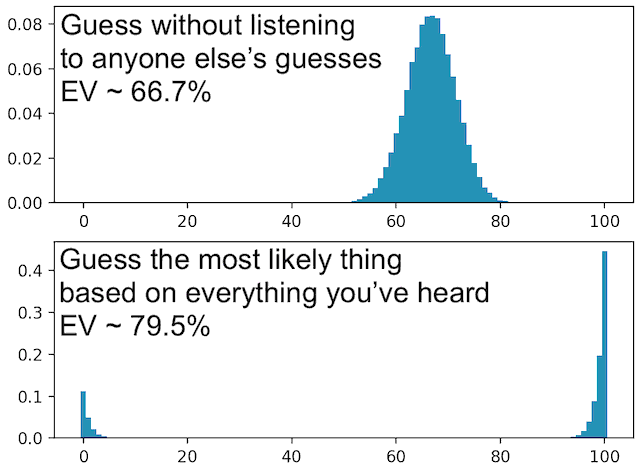 So the players’ strategy is both the selfishly optimal and (as far as I know) the globally optimal strategy; yet, it has this awkward property that as often as one-ninth of the time literally nobody guesses the urn correctly — something that would never happen if all the players guessed individually without communicating.

This paradox (or whatever you’d call it) has practical applications for restaurant reviews, conference submission reviews…