The peasants are revolting

In my CppCon 2015 talk “Futures from Scratch,” I mentioned in passing that std::experimental::when_any, when given an empty list of futures, returns a ready future, instead of blocking forever (which would be the mathematically correct result, I said). This morning a YouTube commenter said, well, it isn’t that weird, because the condition “any single future is ready” is in some sense a “weaker” condition than “all of the futures are ready.” This reminded me of a Wizard of Id comic from my youth: 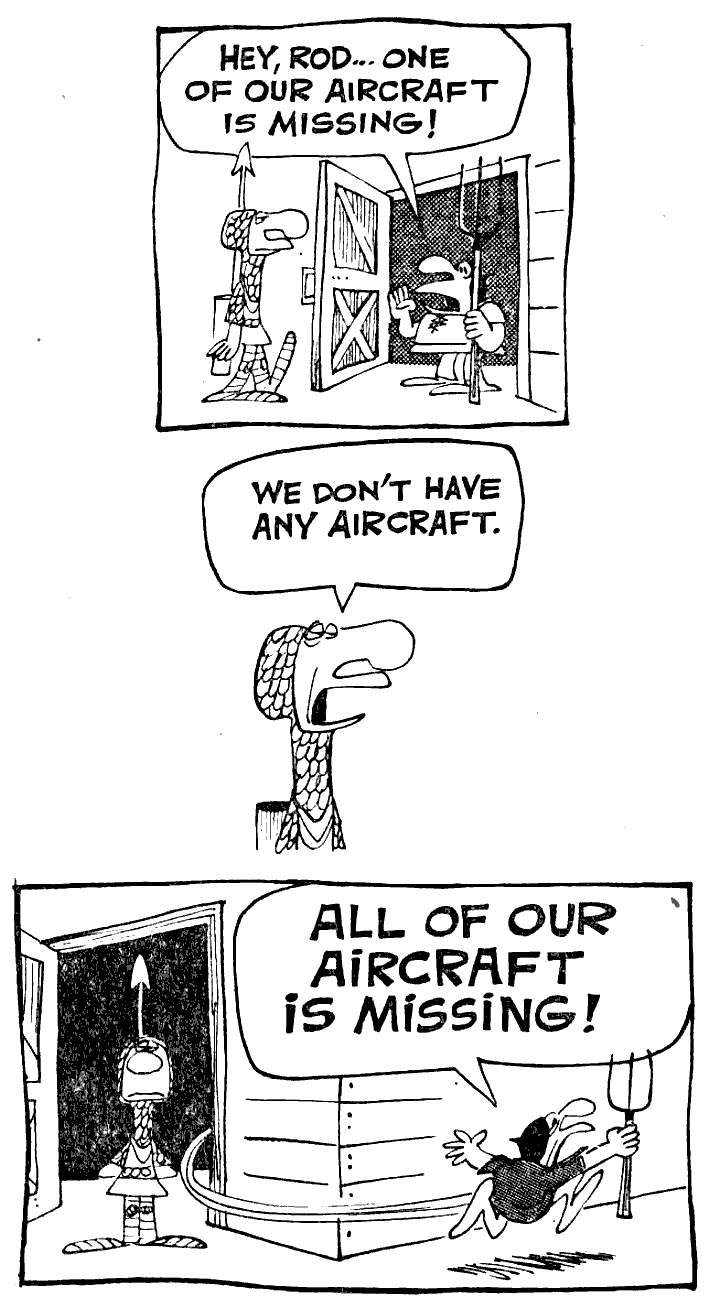 So, I continue to think that experimental::when_any’s behavior is not only mathematically wrong, but surprisingly inconsistent with the rest of the language.

The above comic was collected in Wizard of Id #3: The Peasants Are Revolting. The book cover shows the King, scowling down at the mob: “You can say that again.”

In searching for the book (to extract the image above), I came across this ads-l thread from 2017 which collects a couple other variations on the “revolting” pun-meme, starting with L. Frank Baum’s Land of Oz (1904). The Princess-Ida-esque General Jinjur has come to besiege the Emerald City:

The Guardian of the Gate at once came out and looked at them curiously, as if a circus had come to town. He carried a bunch of keys swung round his neck by a golden chain; his hands were thrust carelessly into his pockets, and he seemed to have no idea at all that the City was threatened by rebels. Speaking pleasantly to the girls, he said:

“Good morning, my dears! What can I do for you?”

“Surrender instantly!” answered General Jinjur, standing before him and frowning as terribly as her pretty face would allow her to.

“Surrender!” echoed the man, astounded. “Why, it’s impossible. It’s against the law! I never heard of such a thing in my life.”

“Still, you must surrender!” exclaimed the General, fiercely. “We are revolting!”

Of course I’d run into the pun before as the punch line to Allan Sherman’s comic song “You Went the Wrong Way, Old King Louie” (1963) (the title and tune in this case being a parody of the 1948 Ray McKinley song):

You went the wrong way, old King Louie
You made the population cry
‘Cause all you did was sit and pet with Marie Antoinette in your place at Versailles […]

You came the wrong way, old King Louie
Now we must put you on the shelf
That’s why the people are revolting, ‘cause Louie, you’re pretty revolting yourself!

But I have a new favorite, from the ads-l thread:

A South American is describing his country to an American woman: “…and our most popular sport is bull-fighting.”

“Oh! Isn’t that revolting?” she asks.

“No,” smiles the South American. “That’s our second-most.”