I was recently thinking about one of the DOS shareware games of my youth: Evasive Maneuvers (Colin Buckley and Chris Blackwell, 1994). It’s a really polished and addictive VGA side-scroller in which you pilot a little Imperial-Shuttle-ish spacecraft through obstacle-strewn levels, trying to keep up with the implacable scrolling of the screen (á là Flappy Bird (2013)) while shooting and dropping bombs to eliminate hazards and to keep your ship fueled by exploding rooftop fuel tanks. It’s a clone/homage to Scramble (Konami, 1981), which I’ve personally never played but which has clearly spawned a lot of imitators. 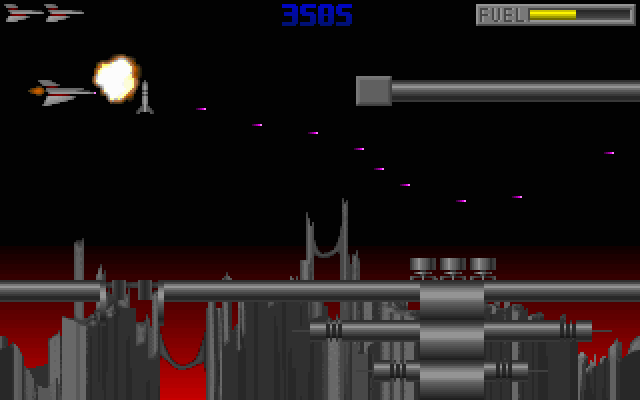 The game was programmed by Buckley and Blackwell’s two-man operation Exaggerated Software and released as shareware. The full game contains four levels.

I was all prepared to write about Evasive Maneuvers as a “lost game.” See, for many years the full version was lost, as far as the Internet was concerned. The shareware level had very wide distribution, but the full game didn’t seem to exist anymore. In 2008, a member of the DosGames.com forums went so far as to write to Chris Blackwell requesting that the full game be re-released. Chris contacted Colin. Colin, having lost the 1994-era .zip but still having the original source code, was able to produce a new full version by recompiling from source! Chris set up an official web page for the game, www.errorwear.com/evasive, which told the saga in greater detail and also provided a link to download the reconstructed full game. But, as of 2021, that official page’s domain is defunct, and while the Internet Archive’s Wayback Machine managed to archive the text and images, it failed to archive an actual copy of evasive_full.zip. In short: the full game was lost, briefly resurrected, and then lost again…

…And found again! The Internet Archive’s MS-DOS software library contains not only a couple of copies of the shareware version, but also (as I learned only while doing my homework for this blog post) a copy of the full game. The zip file’s timestamps are from 1996, indicating that this is the original full version, not Colin Buckley’s recompiled version from 2008.

I found that the best experience came from downloading the .zip (backup) to play in a local DosBox. This lets you run SETUP.EXE to change the keybindings for “shoot” and “drop bomb” away from “Ctrl” and “Alt” (e.g. to “space” and “X”), before running the game proper with EVASIVE.EXE.

So, this is not another “lost game” blog post; Evasive Maneuvers is still alive and well after 27 years!