I’ve been working my way through Best Stories of H.G. Wells (Ballantine, 1960); this morning I read “The Story of the Late Mr. Elvesham” (1897). Highly recommended. It’s got the sort of elaborate Victorian sentence structure and overabundance of novelistic detail that can be delightful when it’s in service of a good plot, and frustratingly plodding when it’s not. In this case, it is. No spoilers.

Vice versa, there’s C.H. Hinton’s An Episode of Flatland (1907), of which only the introductory sections are worth reading at all. When you get to the opening sentence of Chapter One — “It is one of the most interesting things I know…” — you might as well stop there. The introduction sets up Hinton’s Flatland, which is drastically unlike Abbott’s (1884). Where Abbott lets his Flatlanders move freely on an infinite planar plain, Hinton does more of a two-dimensional physics: his Flatlanders live on the surface of a two-dimensional planet, or disk, to which they adhere due to the force of two-dimensional gravity.

With a little knowledge of physics, you might intuit that in a two-dimensional Flatland, with one fewer dimension to disperse into, the intensity of light and the force of gravity fall off linearly with distance, rather than with the square of distance as in our three-dimensional space. This makes stable planetary orbits much trickier to construct (according to Martin Gardner’s “The Wonders of a Planiverse,” collected in The Last Recreations). On the other hand, people with vastly more knowledge of general relativity tell me that in a 2+1-dimensional spacetime a point of space not actually occupied by mass is invariably “flat” and so there is no propagating “force of gravity” in such a world at all! But anyway, Hinton’s 2D planet has gravity.

The planet of Astria has only two continents, and therefore two seas. At the beginning of history, one of the continents is inhabited by two tribes of Astrians: the Scythians (to the west) and the Unaeans (to the east). Now, just as the human body-plan has a favored side, the Astrian body-plan does too; and, just as a human being can’t “turn himself around” to place his heart on the right-hand side of his chest, so too an Astrian can’t “turn himself around” to place his hands and eyes on the west side of his body. As you can see from the following diagram, when war inevitably came, the Unaeans were at a dramatic disadvantage. 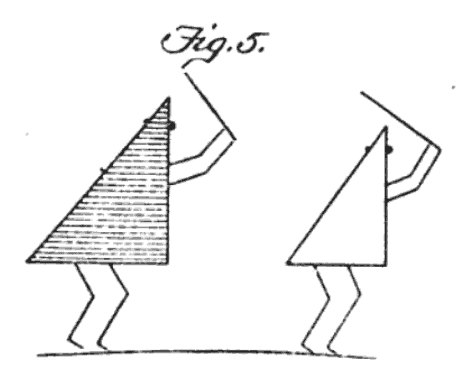 However, the Unaeans were more scientifically advanced. They had even invented astronomy, and lenses — although lenses are difficult to use in a two-dimensional world with no way to create a tube. The only way to make an observatory is to dig into the ground and look upward, through a lens covering the entrance. You can’t even dig a second entrance, because if you do, this happens:

Anyway, through astronomy the Unaeans discovered that their planet was round like a disk, so they invested heavily in sea power and sent ships eastward around the world (portaging across the antipodal continent) to land on the west coast, thus usurping the Scythians’ advantage for their own, and quickly winning the war.

At this point you’ve heard all of the good parts of Hinton’s book; the next twenty chapters are concerned with a boring Victorian “general fiction” love story that often seems to forget that it’s set on Astria at all. For example, the heroine’s father owns a lake house — but in a world where each shoreline consists of exactly two points, surely lake houses would be out of reach of anyone but kings? Or perhaps farmers, since irrigation might be a bigger concern than pleasure-boating. (Besides, you could only have one boat at a time pulled up on shore.) The climax of the plot is a military siege of an “armory” in the center of the continent; in a world where everyone must be used to climbing over whole houses all the time just to get from point A to point B, what would siegecraft look like? How would the besieged defend against sappers? And in a world where any hostile force anywhere on the continent would disrupt all land-based communications between the two coasts, wouldn’t it make sense for the Astrians to have invented flight by this point — or at least catapulting messages back and forth?

The desultory mentions of the third dimension in the actual book are limited to spiritual allegories, in much the same vein as H.G. Wells’ “The Plattner Story” (also collected in that Ballantine paperback).

Hinton’s An Episode of Flatland: fun prologue, terrible rest of the book.

Speaking of 19th-century fads: Last week, somehow via Hacker News’ link to “Why Esperanto is not my favorite language” (Geoff Allan Eddy, 2002, originally here), I ended up spending a lot of time reading the “back issues” of constructed-language enthusiast Mark Rosenfelder’s zompist.com. Previously linked from this blog: “If English was written like Chinese.” He also has a page on the Syldavian language from Hergé’s Tintin comics, and lots of posts that aren’t about conlangs at all:

Meanwhile, from the same domain as the original essay, a vast collection of jokes in Esperanto (which of course I’m reading by means of the modern universal language: Google Translate). Every so often there’s one that’s new to me. Here’s one that would be a Polish joke if it weren’t already an Esperanto joke:

When the British government invited commercial proposals for the digging of the Channel Tunnel between England and France, one man submitted a bid for only £10,000. “How can you possibly dig under the English Channel for only £10,000?” asked the project manager.

“It’s simple,” replied the low bidder. “My partner takes a spade, goes to France and starts digging. I take another spade and start digging from England. We’ll both keep digging until we meet in the middle.”

“Hm, I see. But what happens if, through a miscalculation, you two do not meet?”

“That’s even better for you!” replied the bidder enthusiastically. “In that case you will have two tunnels!”