In the Journal of the Indian Mathematical Society, June 1920 […] A. Narasinga Rao [proposes]: “Determine generally the form of a vessel whose contents are just spilling over in the position of equilibrium, whatever the amount of liquid it contains, (1) when it rests on a horizontal plane; (2) when it is suspended about a horizontal axis.”

This problem is known as “Dr. Milner’s lamp,” after Isaac Milner (1750–1820), Dean of Queen’s College, Cambridge. Milner’s having designed an idiosyncratic lamp is mentioned in the biography written posthumously by his niece, although she doesn’t imply anything mathematically interesting or ideal about the lamp’s shape, merely that it was a well-crafted reading lamp popular among Milner’s colleagues. (As a Fellow of the Royal Society, Milner corresponded with Sir Humphry Davy (1778–1829), inventor of a useful lamp of his own.)

Augustus De Morgan in A Budget of Paradoxes describes the apocryphal lamp in terms of Rao’s formulation (2):

A hollow semi-cylinder […] revolved on pivots. The curve was calculated [such] that, whatever quantity of oil might be in the lamp, the position of equilibrium just brought the oil up to the edge of the cylinder, at which a bit of wick was placed. As the wick exhausted the oil, the cylinder slowly revolved about the pivots so as to keep the oil always touching the wick.

Arthur Cayley’s “On a Differential Equation and the Construction of Milner’s Lamp,” Proceedings of the Edinburgh Mathematical Society 5 (1887), gives a solution of problem (1). I’m unclear on Cayley’s assumptions/invariants, but the result seems to be practical. It starts with a semicircular cylinder, then adds a weight in the shape of a segment having the same density as the oil, and coming right up to the lip. This ensures that as the level of the oil is infinitesimally lowered, the vessel tips infinitesimally toward the lip; yet the center of gravity of the whole weight-plus-oil system always remains centered over the vessel’s point of contact with the table. 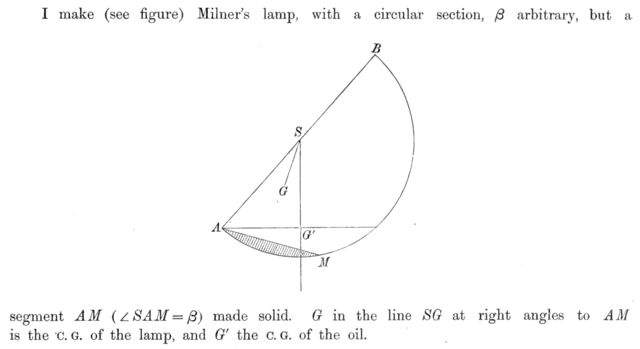 The same approach would work for a spherical vessel, circular hole, and cap-shaped weight.

Now, if the weight is heavier than the oil, the whole thing falls apart. (Imagine the limit, where the weight has density 1 and the oil has density close to 0.) But you can replace the weight with a slight inward-pointing “lip,” which accomplishes the same goal as Cayley’s weight.

Vice versa, it seems to me that the whole solution falls apart if we consider the density of the wall of the vessel itself. Again in the limit, if the semicircular wall of the container has density 1 and the oil has density close to 0, then the equilibrium position will simply have the opening at the top:

Now, Cayley’s solution might be “cheating,” as far as the original problem statement is concerned, because it involves a solid weight besides the oil; or, equivalently, a container of non-uniform density.

The American Mathematical Monthly credits “D. Biddle” with a solution to (2), published in Mathematical Questions and Solutions from the “Educational Times” 49 (1888), pp. 54-55. At first, Biddle seems to me to be proving that the ideal solution (again assuming weightless walls) must be a circular arc. Assuming that the bowl pivots about \(P\), then:

However, from this Biddle somehow derives that an appropriate curve would be \(r=\sqrt{\cos\theta}\) (see the graph at Wolfram Alpha), with the pivot \(P\) located somewhere difficult-to-compute in the middle. (All you’d have to do is plot any two center-of-gravity lines \(PB_i\) and take their intersection; but those lines are themselves difficult to compute.)

No particular conclusions here — my math isn’t up to the task! But it would be interesting