CppCon 2020 is half over; this afternoon I gave my B2B talk on algebraic data types. On Friday I give my B2B talk on concurrency, and next week I’ll deliver my three-day “Classic STL” training course — for which there is still time to register! :)

Tonight I emceed the first game of the second annual CppCon “C++ Pub Quiz.” (There’s a second game happening tomorrow night.) What is C++ Pub Quiz, you ask? It’s a straightforward trivia night — five rounds, ten questions per round, write down your team’s answers on a sheet of paper and turn it in at the end of the round. High score after five rounds wins the game. 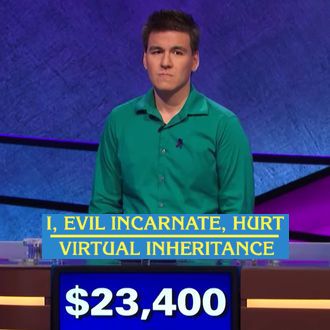 Since we’re doing it all in cyberspace this year, there were more moving parts than usual. We met in Remo room generate_n(). I sat at a table in the back and used the general chat to tell people to sit up front, and also to join a Google Meet I’d set up. I read questions aloud into the Google Meet, and each team was able to discuss their answers via their Remo table chats. (We did have some teams using text chat, and some amusing snafus when teams accidentally started typing their answers into the general chat instead of their table-specific chat. But generally speaking, it went off smoothly.) Each team appointed a team captain to submit their answers via a Google Form which I set up, which you can see here.

During the game, I would mute my mic in Google Meet and hop around from table to table in Remo to see how the teams were getting along. Everyone seemed to be having a good time! The only thing was that I could never eavesdrop on The French Connection or whatever team was at table 1, because their tables were full. Also, I wish I had included a space on the answer sheet for “table number,” so that I could map the team names to the table numbers. I’m making a fresh answer sheet for Thursday night’s game, which will include a blank for “table number.”

If you’re planning a similar event, take note: Everything takes longer online. It took us 2.5 hours to get through five rounds of play. But everyone had fun!

A sample round of C++ Pub Quiz looks something like this:

If you missed the first game, a second game is happening Thursday evening at 4:00pm Aurora time. Even if you’re not virtually at CppCon already, there’s still time for you to buy a reduced-price conference pass and get online in time to kick some butt at Pub Quiz!

Oh, and there’s some great conference talks Thursday and Friday, too.