PSA: Did you know that you can access all of JSTOR, and several other online archives, if you have a Wikipedia account of sufficient age with sufficiently many recent edits? Visit wikipedialibrary.wmflabs.org to learn more.

In the June 1981 issue of Scientific American (JSTOR; direct link for Wikipedia users) Martin Gardner’s “Mathematical Games” column is titled “The inspired geometrical symmetries of Scott Kim.” Readers of this blog will remember Scott Kim as the creator of many fantastic ambigrams: “Scott Kim’s rotational ambigrams for the Celebration of Mind” (2020-10-18). Most of Gardner’s column indeed focuses on that part of Kim’s oeuvre. But the bit that piqued my interest this week was the following space-filling puzzle:

First we must define a snake. It is a single connected chain of identical unit cubes joined at their faces in such a way that each cube (except for a cube at the end of a chain) is attached face-to-face to exactly two other cubes. The snake may twist in any possible direction, provided no internal cube abuts the face of any cube other than its two immediate neighbors. The snake may, however, twist so that any number of its cubes touch along edges or at corners. A polycube snake may be finite in length, having two end cubes that are each fastened to only one cube, or it may be finite and closed so that it has no ends. A snake may also have just one end and be infinite in length, or it may be infinite and endless in both directions.

[…] Kim has found a way of twisting four infinitely long one-ended snakes into a structure of interlocked helical shapes that fill all space. The method is too complicated to explain in a limited space; you will have to take my word that it can be done. […] Kim has conjectured that in a space of \(n\) dimensions the minimum number of snakes that completely fill it is \(2(n-1)\), but the guess is still a shaky one.

I’d love to see Kim’s space-filling quadruple-snake configuration — Gardner doesn’t show it, even when he reprinted this column with addenda in The Last Recreations (1997) and The Colossal Book of Mathematics (2001). I have asked Math StackExchange in case anyone there knows. Someone else is also interested:

Every polycube of size less than 4 is a snake. At size 4, we already run into a fiddly difficulty! Certainly the I, L, and Z tetracubes, and the two “twists” that the Soma cube calls A and B, are snakes. But what about the square (smashboy)? Its head adjoins its tail, making it a non-snake if our rule is that no cube may adjoin any cube except its neighbors. But by Martin Gardner’s definition above, the square is a snake: each cube adjoins no more than two others. We might call the square tetromino a polycube ouroboros. 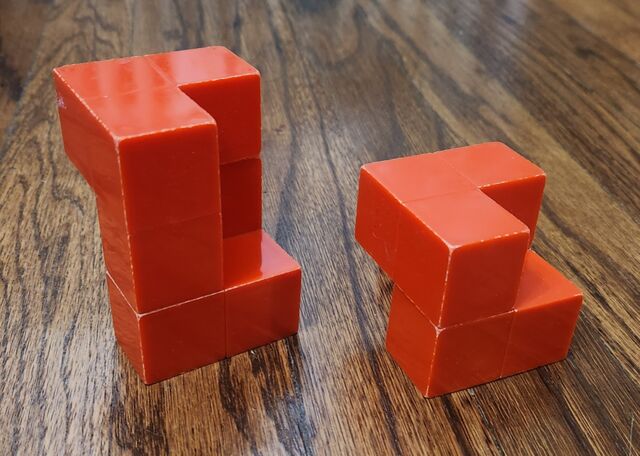 For non-ouroboroi, we have a choice to distinguish one of the two end cubes as the “head” (a “directed polycube snake”), or to leave them undifferentiated (an “undirected polycube snake”). For example, the L-tetromino corresponds to two distinguishable directed snakes: one with its head on the short leg of the L, and one with its head on the long leg. But the I-tetromino (four cubes in a straight line) corresponds to only one directed snake.

I wrote a quick-and-dirty C++20 program to enumerate polycube snakes and undirected ouroboroi (source code). It produced the following table:

Notes on the C++ program

We can represent a snake using notation inspired by Albie Fiore’s Shaping Rubik’s Snake (1981). Peer down one end of the snake and move your eye along the segments, recording at each transition whether you need to turn left, right, up, down, or straight (and rotating the whole snake each time to keep the current cube in front of your eye). In this notation the two tricube snakes are SS and SR; the undirected tetracube snakes are SSS, SRS, SRL, SRU, SRD, and the ouroboros SRR; and the hexacube ouroboros can be represented as SRDRD.

The above letter-strings are all in “canonical form”: they begin with S, and the first turning we come to (if any) is always an R. It’s possible to represent the V-tricube “non-canonically” as SL or SU or even LR, but that would be confusing, so let’s not.

The undirected L-tetracube can be represented as either SRS (starting on the short leg) or SSR (starting on the long leg); I arbitrarily choose the string that comes first alphabetically as the unique representative of its equivalence class.

So, the program’s job is essentially to generate all possible \((n-1)\)-character letter-strings, and then winnow out the ones that aren’t in canonical form, and then further winnow out the ones that aren’t snakes (for example, SSRURU’s second cube has three neighbors). This produces a list of directed snakes and/or ouroboroi. For non-ouroboroi, we must then compare the snake to its own reversal to avoid double-counting it. De-duplicating ouroboroi, which have no designated head or tail at all, is more tedious.

To generate the initial stock of strings_of_length(n), I initially used a C++20 coroutine — a function returning a generator<string_view> onto a string stored in the coroutine frame. This was one of my first forays into coroutines, and I found it quite painless for this use-case. The code for generator is given in “Announcing Quuxplusone/coro” (2019-07-03). The caveat here is that it would have been just as easy in this case not to use coroutines; and when I factored out odometer(s) into its own function and got rid of the then-trivial coroutine wrapper, things got 1% faster.

This was also the first time I’ve used C++20 std::span<T>, and again it seemed like the right tool for the job; although I also have a nagging feeling that my code went overboard on all the string_views and spans and maybe there could have been a better way to organize it from the beginning.

To winnow out duplicate snakes, at first I wrote a function string canonical_reversal(string_view) to actually produce the reversal of a snake (for example, the reversal of SSR is SRS), but eventually I realized that all we do is compare that reversal to the original string and bail out if the reversal is alphabetically less — so we don’t actually have to build the reversed string at all! Instead of

we can simply do

This not only saves memory accesses on RS, but also short-circuits quite a bit of the loop.

My next optimization was to notice that no valid snake (except smashboy) can ever contain the substrings RR, LL, UU, or DD; so any time our odometer algorithm creates such a substring, we should “fast-forward” in constant time to the next string. Of course we should also fast-forward any time we create a non-canonical letter-string, such as SSLSS; we should skip straight to SRSSS in that case.

With these algorithmic optimizations, on my laptop, the above program can enumerate all 64,380,796 undirected sixteen-cube snakes (and all 12,562 ouroboroi) in just over a minute.